The Artists at Spring Arts Collective 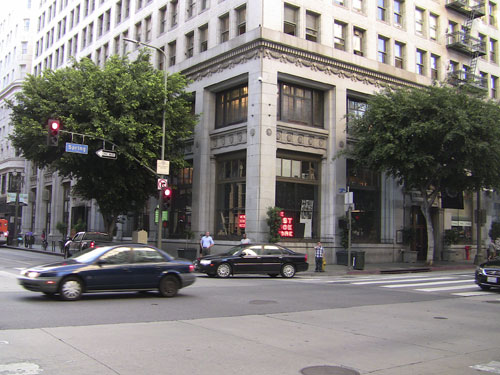 By the 1890's, the region near Temple and South Spring Street was already the center of commerce for Los Angeles's thriving business community. And in the early 1900s, the city center began spreading south with the city's banks and financial institutions concentrating heavily along Spring Street. The building boom continued into the 1920s and it wasn't long until Spring Street was dubbed the "Wall Street Of The West" -- and so it remained until after World War II.

Spring Street also lays claim to the birthplace of the motion picture business in Los Angeles. In 1898, Thomas Edison filmed a 60-second film titled "South Spring Street Los Angeles California." He and his crew had to mount a giant camera on a wagon to film the various streetcars, bicycles and horse-drawn wagons traversing Spring Street. The film has been preserved and you can watch a video of it below:

Like much of the historic core of downtown, the buildings along Spring Street were left to neglect and disrepair as wealthy financial institutions began moving west. However, since the 1980s, South Spring Street has seen numerous redevelopment projects, and in recent years, artists and galleries began moving into the old financial district, so much so, it is now known as Gallery Row.

As with other cities undergoing regentrification and renewal, it was the artists who lead the way. Urban pioneers followed, and now wealthier residents are moving downtown converting the old buildings into upscale lofts.

Other buildings of note next to the Spring Arts Tower:

El Dorado Lofts 416 S. Spring Street – used to be a 12-story hotel built in 1913 with enameled brick, terra cotta, and it's lobby adorned with Batchelder tiles. Charlie Chaplin was its most famous resident moving in soon after it opened (then known as the Hotel Stowell). Chaplin told a funny story about a loud phone call regarding a $25,000 appearance fee: "My bedroom window opened out on the well of the hotel, so that the voice of anyone talking resounded through the rooms. The telephone connection was bad, 'I don't intend to pass up twenty-five thousand dollars for two weeks’ work!' I had to shout several times. A window opened above and a voice shouted back: 'Cut out that bull and go to sleep, you big dope!'" In 2008, the building was converted into lofts under the name El Dorado Lofts.

Los Angeles Stock Exchange 618 S. Spring Street – When the Los Angeles Stock Exchange opened its doors there in 1931, the country was deep into the Depression. There are three bas-relief panels carved into the granite above the building's entrance. The panels portray three elements of a capitalist economy: "Finance" shows capitalists, "Production" shows an aircraft engine, a steel worker pouring molten metal and a worker stirring it. The "Research and Discovery" panel shows oil derricks, factories, a chemist conducting an experiment. The interior has been preserved, and was originally designed by Julian Ellsworth Garnsey. Offices occupied lower floors and the top two floors included: a club with a library, a card room, a billiard room, and reading rooms. The basement held a 2,660-sq. ft. printing room and a vault. In 1986, the exchange (by then part of the Pacific Stock Exchange) moved out of the building. In late 2008, the building underwent extensive renovations and reopened in 2010 as Exchange LA nightclub. The Exchange is frequently used for location filming, and has been featured in The Big Lebowski, The Social Network, and numerous television shows and commercials.

A video about the Spring Arts Tower:

An excerpt from Thomas Edison's film of South Spring Street in 1897: